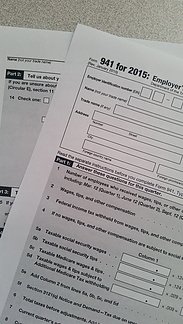 I’ve encountered it a few times over the years. I meet a business owner and he or she are in a terrible position. They had experienced a downturn in business, or had over extended themselves in Accounts Payable, or for any number of reasons found themselves with a lack of cash. So, they made the mistake of choosing not to remit their payroll taxes when due. To instead use that cash for what they believed to be a short term cash crunch. They thought they’d get caught up when that big contract came through, or after the upcoming busy season, or next quarter. Unfortunately, that contract wasn’t as big as they thought it would be, or busy season wasn’t as busy as they’d planned, or next quarter’s cash flow was worse than last quarter. And by the time they sought help, or by the time the IRS contacted them for payment, the penalties & interest had accumulated to a point where digging out of the hole was nearly impossible.

One of the reasons that payroll tax liabilities can spin out of control so fast is the IRS has historically waited until after the employment returns were filed and penalties & interest had already begun to accrue to a dangerous level before contacting the employer for the first time. That has now changed.

In 2015 the IRS launched a new program to identify and assist employers who are falling behind in remitting their payroll taxes more quickly. The effort has been named the “Early Interaction Initiative”. The IRS plans to monitor deposit patterns through the Electronic Federal Tax Payment System, or EFTPS, and (hopefully) be able to identify Employers who are struggling to pay their liabilities on time or even at all.

The IRS will now send a letter to the Employers reminding them of the payment schedule and their responsibility to remit the liabilities on time, invite them to contact the IRS to discuss the situation and potential assistance. In addition, there may be automated phone calls and when appropriate the IRS may send a revenue agent to the place of business.

Even if you are using a third party payroll processor, it is important to know that your liabilities are being remitted timely and on the appropriate schedule. It is the EMPLOYER’S responsibility to remit the tax liabilities.

If you fall behind and receive these letters or automated phone calls, it is in your best interest to respond immediately, and start working with the IRS to resolve the matter. First, it will help keep the penalties & interest from becoming a burden you may not be able to get out from under. And, second, the Department of Justice will start using these notices to determine who to take employment tax enforcement action against. And the notice can be used as evidence of willfully failing to meet the employer responsibilities.

Having an experienced and knowledgeable bookkeeper either on staff or as a consultant can help you avoid making decisions that could lead you and your company down this path. A bookkeeper will help you find better ways to cut your costs and improve your cash flow, while keeping your informed of your responsibilities under the tax regulations.

You can learn more about the Initiative at www.irs.gov.